Hockey in the Hood 7 action photos

Photos courtesy of Ed Krasinski
Posted by TeamHyperNet1 at 7:02 PM No comments:

The Hockey in the Hood VII Champions

Congratulations, you have captured the Willie O'Cup!

Photos courtesy of Ed Krasinski
Posted by TeamHyperNet1 at 11:47 AM No comments:

Posted by Roy Bruinsma at 10:44 PM No comments: 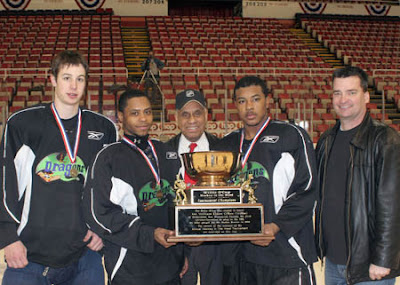 Who will win the Willie O'Cup?
Posted by TeamHyperNet1 at 2:06 AM No comments:

Labels: Detroit Dragons, Detroit Hockey Association, HITH, Hockey in the Hood 7, NHL Hockey is for Everyone

Posted by Roy Bruinsma at 9:47 PM No comments:

Posted by Roy Bruinsma at 9:51 PM No comments:

Hockey in the Hood Mentioned in McClatchy News Article

Days of all-white hockey over, on ice and in booth
By William Douglas | McClatchy Newspapers

WASHINGTON — When he broke the National Hockey League's color barrier with the Boston Bruins in 1958, Willie O'Ree heard all sorts of myths about why there were so few black hockey players.

"People were saying that blacks had weak ankles and weak knees. It's crazy when you hear things like that," said O'Ree, now 75, who's the NHL's director of youth development and ambassador for the league's "Hockey Is for Everyone" initiative. "I don't hear too much of that now."

These days, O'Ree hears about growth in the number of blacks in hockey in nearly all areas of the game, from the NHL to the broadcast booth to community rinks.

The NHL has more than 20 black players on team rosters this season, an all-time high. The Atlanta Thrashers alone boast five black players — defensemen Dustin Byfuglien and Johnny Oduya and forwards Evander Kane, Anthony Stewart and Nigel Dawes — another record. The Thrashers have four other black players in their minor league and draft systems.

In addition, dozens of minority-oriented youth hockey programs across the United States — from Ice Hockey in Harlem to Washington's Fort Dupont Ice Hockey Club to GOALS of Anaheim, Calif. — have been exposing kids to the game for decades, supplying gear and rink time to those who can't afford it.

Another program, the Detroit Hockey Association, hosts an annual "Hockey in the Hood" tournament during Black History Month that attracts minority youth hockey teams from across the country.

MORE
Posted by Roy Bruinsma at 8:25 AM No comments: