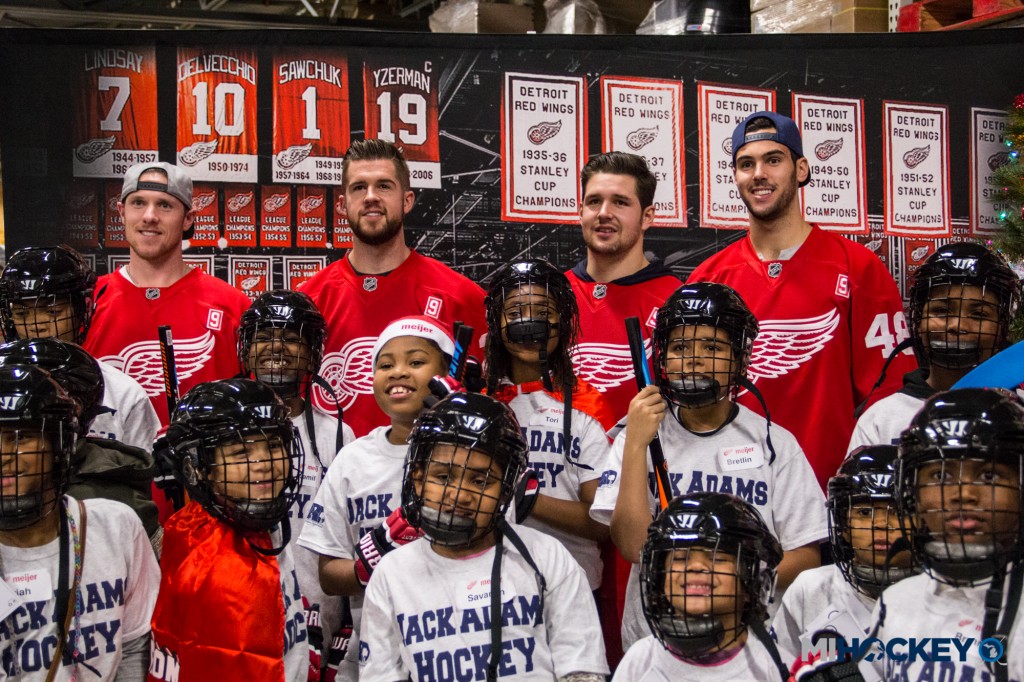 By @StefanKubus -
A group of young hockey players from Detroit began Thursday night giving back to fellow children in need alongside Detroit Red Wings players and their significant others.
What they weren’t aware of is the joyous surprise that followed.
Twenty kids from the Introduction to Hockey program at Jack Adams Memorial Arena in Detroit were treated to a pizza party at Meijer in Madison Heights and then went on a shopping spree with Detroit Red Wings players – Jimmy Howard, Mike Green, Xavier Ouellet and Ryan Sproul – and the Lady Wings.
But the purpose was not to find gifts for themselves, but to give back to patients less fortunate at the Children’s Hospital of Michigan.
“Before the surprise, a lot of the kids were really excited to give back to the community, to give back to those in need, so that was really what mattered,” Jack Adams coach Dave Pitts said.
Ouellet said it was great to see the kids’ enthusiasm for generosity.
“That was fun. I was walking around with the kids and they were all so excited to get gifts for other kids, which was kind of surprising because usually as a kid you’re thinking about yourself, but it wasn’t like that at all; they were all in the spirit of sharing and trying to get nice gifts for their friends and people they might hardly know, so it’s great to see that.”
Being the holiday season, that’s really what it’s all about, too.
“We have kids of our own and it’s an important time of year for everyone,” Howard’s wife, Rachel, said. They were just excited to shop for the kids in the hospital. They didn’t think they were getting anything else in return, and they were still excited. When they found out they got to shop for themselves and they got hockey equipment, it’s huge. It’s really, really special.”
Once the kids were done checking out, Wings defenseman Mike Green announced that they would then be receiving the chance to do it all over again, but this time, they were able to pick out gifts for themselves.
“That was awesome,” Pitts said. “To see these guys willing to give back to the community, willing to give back to those in need in underdeveloped areas… it was really heart-warming to see, that they were once at their level and are giving back to the community.”
And the surprises didn’t end there; once the kids were done shopping, they learned the Wings had provided them with brand-new Warrior hockey equipment. For players who were once in the kids’ shoes – or skates, if you will – it was an especially neat surprise to give.
“That’s awesome, with the help of Warrior, that we can do that and get gear for these kids to play and live their little dreams,” Ouellet said. “It doesn’t seem like it, but equipment is pretty expensive and it’s hard to get, so it’s fun to see the kids get it and get a chance to live their dream.”
On Wednesday, Dec. 14, the Wings will deliver the purchased toys to the Children’s Hospital of Michigan as part of their annual holiday visit.
“Not gonna lie, it’s tough when you go in there and you see what the children are battling through,” Howard said. “It’s tough, especially now having children at home. You see them in that situation, you get a little emotional yourself. You never want to see anyone go through that, but to be able to go up there and give them a few moments of cheer, it’s definitely well worth it.”

Posted by TeamHyperNet1 at 7:06 PM No comments: 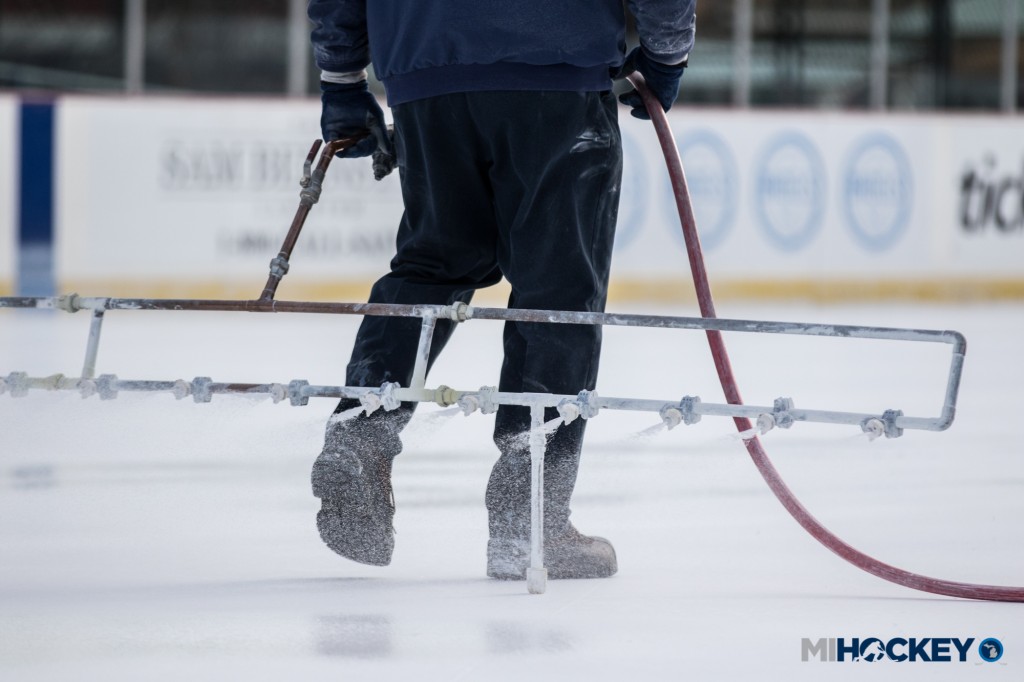 By @MichaelCaples –
DETROIT – For most people, the winter holiday season means gifts, parties and fun.
For the Clark Park volunteers and staff, it means it’s time to build an ice rink.
The work required to build Metro Detroit’s only outdoor hockey facility officially began on Dec. 8.
The Clark Park crew was at the rink by 8 a.m. Wednesday morning, ready to place layers of paint and then layers and layers of ice down to get their ice rink ready for the 2016-17 season. 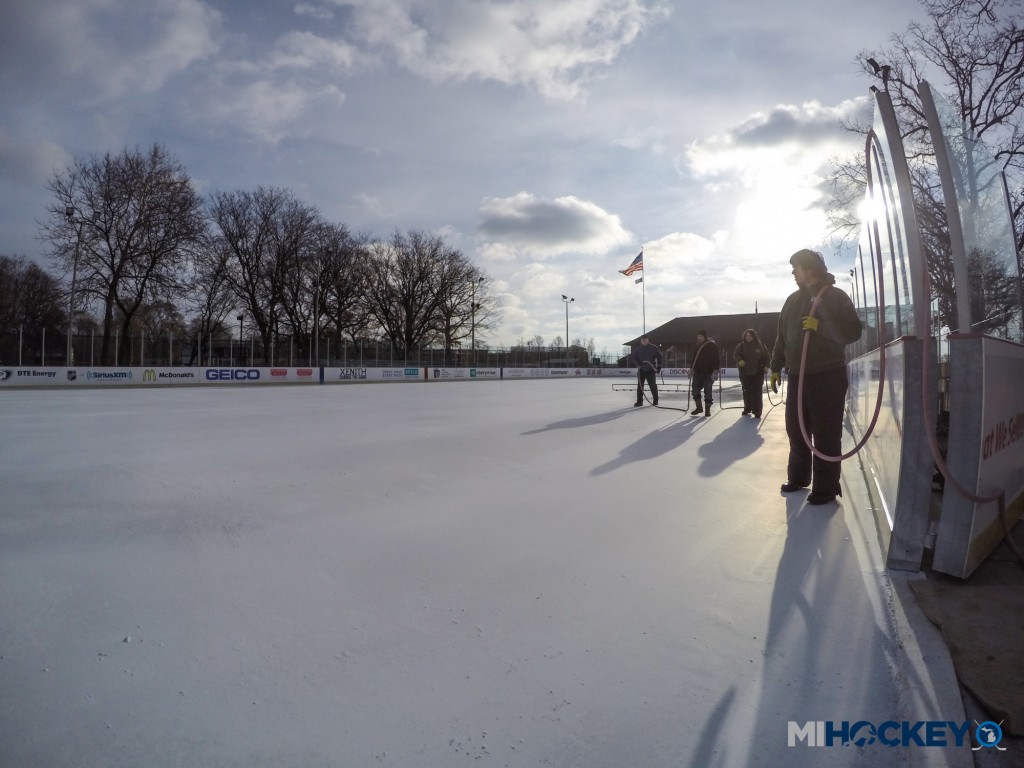 The original plan was to start the process the day before, but weather conditions stalled the staff – something only an outdoor rink would have to deal with.
The lengthy process – hockey director Ryan Mcilhiny expects to out all night watering the playing surface – is all worth it, however.
“It’s very exciting,” Mcilhiny said. “We’ve been anticipating this day for a very long time. There’s a lot of days and hours and weeks that add up to get to it and once you finally get to it, it takes a lot of hard work and it’s really great to see everyone come together.
“It’s a lot of fun and we’re excited. We’re glad the day is here.” 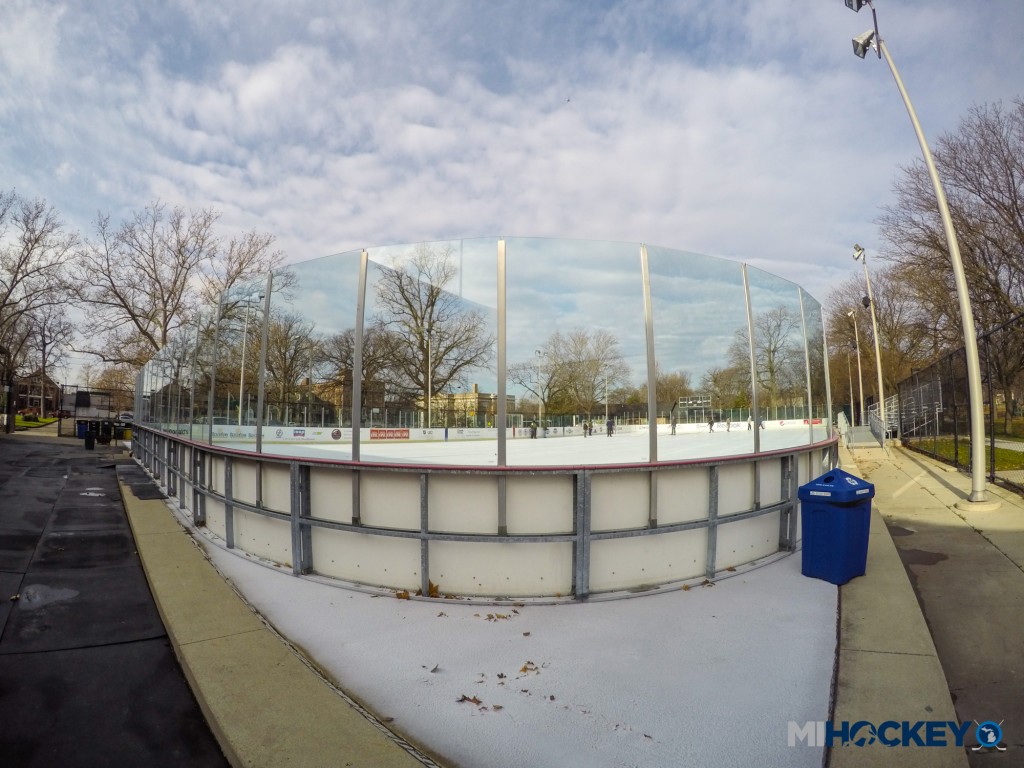 For Clark Park Coalition director Anthony Benavides, establishing the ice around this time is a big win for his program.
“Getting the ice up in December is always a good thing, especially if you do it before Christmas so you can have a Christmas party, Christmas skate, family skate, ice hockey, Learn to Skate, you name it,” Benavides said. “So hopefully the weather, looks like it’s going to stay cold, and the next few days we’ll continue to water the ice rink because you have to build it up to about a half inch, three-quarter inch. Once we get that going and hopefully that’ll be by Sunday maybe, we’ll just have open skate and open hockey and have kids come out and parents come out and coaches and just have a good time and that’ll carry through the season.”
As far as the ice construction itself, well, it’s a lengthy process.
“It’s a concrete slab before the ice goes in and, to run you through the process, first you have to put a couple layers of ice down, so you water the ice and then once that’s completed, we have a guy named John Kraft who comes around – he actually does many rinks in the Midwest – you put down a layer, three layers of what’s called Jet Ice – and it’s basically the white paint that makes ice white,” said Troy Anderson, a coach and part-time employee for Clark Park. “A lot of people think when you go to an ice rink, the ice is just naturally white. It’s not, you’ve go to put three layers of paint down. We do that and then we lay down the outlines for the blue lines, the goal lines and center ice, so it’s a tedious process. You need basically a fire hose to put everything out and five or six people have to hold up that hose while John is going around and painting the ice because if the hose drags along, it’ll mess up the paint, so it’s a pretty tedious process.” 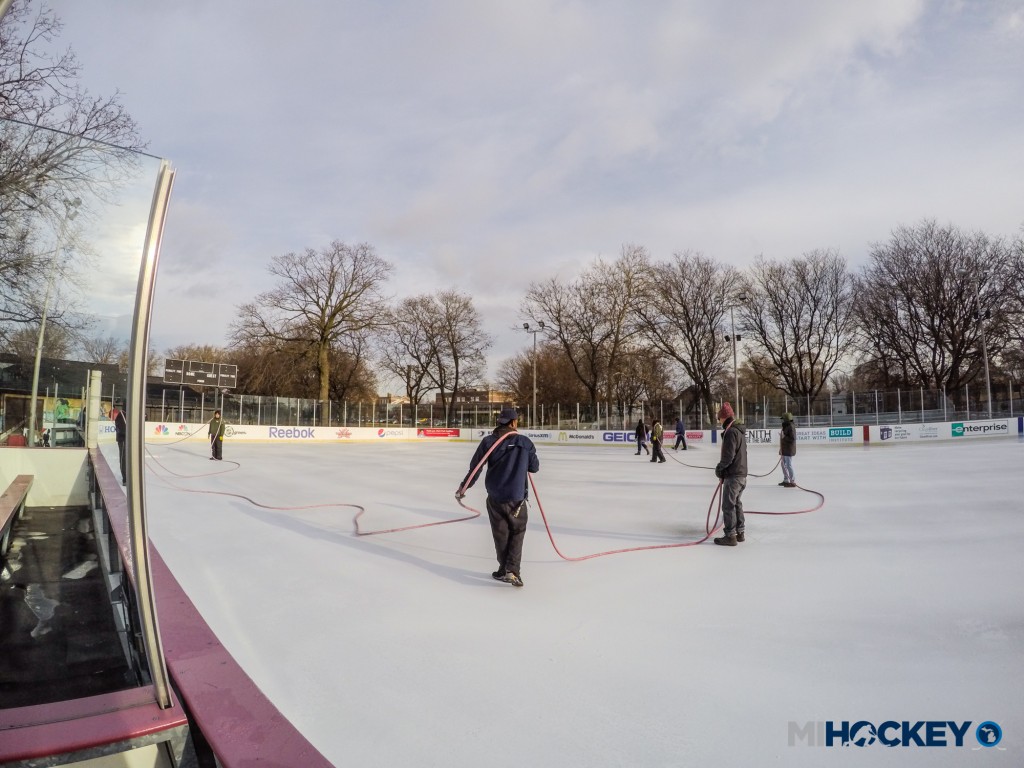 A tedious process, to be sure, but the rewards are many.
“The rink is really special for southwest Detroit,” Benavides said. “The original rink was put in way back in the ‘60s and there’s been two more rinks after that. There was a small circular rink, there was a rink during the ‘70s that was put in and this was put in in the 2000s. It’s been a tradition throughout the neighborhood here – people come for skating first and foremost. And then the ‘70s, it became a hockey rink. Since then, there’s been a lot of hockey around here, so it’s real important for the kids in the neighborhood. They walk here – it’s a walking community – the schools use it, the churches use it and parents bring their children down here. Just generation upon generation of participants that used it way back when they were kids. Now they’re bringing their own kids, so it’s a real asset to the community, for the hockey world and just for the community. They love coming here.”
And that’s why the workers describe the day as a holiday, and not as a freezing and miserable experience.
“This is my favorite day of the year,” Anderson said. “It feels like Christmas almost because all year you see this place at Clark Park and when it finally comes around time to put the ice in, it’s just a special day and you’ve got 15 or so people from the community around here come out and help out and it’s an all-hands-on-deck endeavor and it’s gonna take a good 24 hours to build the ice up and make it ready to go.” 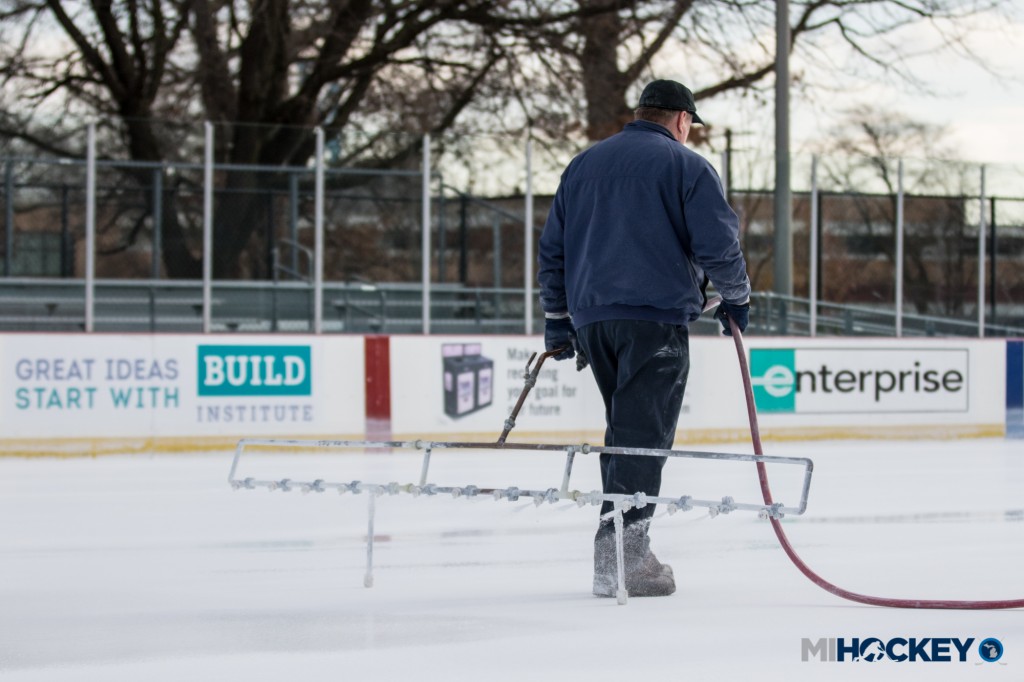 Photo by Michael Caples/MiHockey
Posted by TeamHyperNet1 at 7:02 PM No comments:

Posted by TeamHyperNet1 at 8:02 AM No comments: