The Detroit Hockey Association's (DHA) bylaws speak to a spirit of mutual respect and teamwork amongst and between players, parents, coaches, fans, and board-members:


Item 2: Involvement
Parental involvement is encouraged by the DHA.
Parents assuming support roles are required to maintain good sportsmanship and an environment tailored to encourage each child enrolled in the program.

ARTICLE A-III: DISCIPLINE
The Board shall enforce each decision by a two third, majority vote.

Item 1: Minor Infractions
Coaches may suspend a player for up to (3) games whom:
a) Exhibits insubordination, poor attitude, improper language and/or lack of interest.
b) Arrives late.
c) Engages him/herself in destructive behavior.
Coaches must notify the President or Vice President within 72 hours of any disciplinary action
taken. Coaches must submit a Uniform Incident Report to the Board within one week of issuing
the discipline.  The Board may review, modify, or uphold the disciplinary action undertaken by
the coach (es).

Item 2: Major Infractions
Coaches may request, in writing, to the Board, the release of a player whom:
a) Exhibits habitual and deliberate insubordination, poor attitude, improper language and/or
lack of interest or excessively violent behavior (constant fighting in scrimmages or games).
b) Habitually arrives late.
c) Exhibits deviant, antisocial behavior.
d) Plays under the influence of, or found in possession of drugs or alcohol.
e) Possesses a weapon.
f) Deliberately and knowledgeably attempts to injure another player.

Item 1: Minor Infractions
The Board may discipline any Coach or Manager who:
a) Exhibits unsportsmanlike or discriminative conduct.
b) Verbally abuses players, officials and/or spectators.
c) Assigns ice time unequally.

Item 2: Major Infractions
The Board may remove any coach or manager permanently who:
a) Exhibits habitual and deliberate insubordination, poor attitude, improper language and/or
lack of interest.
b) Habitually arrives late and/or is absent for an extended period without notice.
c) Exhibits deviant, antisocial behavior.
d) Coaches/manages under the influence or in possession of drugs or alcohol.
e) Possesses a weapon, with the exception of law enforcement officers.
f) Habitually verbally abuses players, officials and/or spectators.
g) Violates DHA Policy (MORE)
Posted by Roy Bruinsma at 12:05 PM No comments:

As the 2011/2012 season comes to  a  close, I would like  to  take a minute to thank all of  the parents from the I-program.  And offer a special note thanks  to  Coach Marcus Norwood also. The kids involved in the I-program are  the  future of the Detroit Hockey Association and if their parents continue to be so supportive,the DHA will be in good hands in the  future.

However, as a  returning  coach and a  former board member, I have to admit to being unhappy with the  number of players involved with our  teams.  And I wonder every day,  why we didn't follow through with our recruiting  plans from last  Summer. This is water under  the bridge now,and the future of hockey at Jack Adams arena will now rest in the  hands of those who  will vote for new board members this year.

I truly hope that an election takes place,and the  torch is  passed to a new generation,with new ideas, who will keep Hockey going strong  at Jack Adams  for years to  come. Please take time to review the DHA Bylaws (link) to learn more about the open DHA board positions.
Posted by Detroit Coach 1984 at 10:29 PM 1 comment:

Next we would like to congratulate the Peewee team for winning the championship for their division!!!!! Way to go Dragons!!! Your hard work, commitment, and dedication paid off and you are the champions!!!
The 2011-2012 hockey season is slowly coming to a close. I hope you enjoyed it as much as we have. It has been great to see the players grow and improve in their skills over these months of hockey!! Both of our competitive teams are preparing for the upcoming spring league. We wish them good luck and much success!!!
It is our plan to skate until at least the second week in May. So our last day of skating is tentatively set for May 12, 2012. If this should change I will let you know as soon as I am aware. With that said we have about a month and half of skating left. Please take advantage of this making sure you are still attending your practices!!! In the next couple of weeks we hope to have clinics set-up to help with further skill development so please look for more information to come regarding this.
Registration Fees:
If you owe any fees please make arrangements to pay these as soon as possible. All fees at this time are past due and need to be paid. Remember you will not be allowed to register for next season if you an outstanding balance.


Important Dates:
March 30, 2012: Edna Murray Foundation Skating Party 6pm-9pm (This is a fundraiser Mrs. Murray does in honor of her daughter who previously skated at Jack Adams who died in a tragic bus accident to raise money for scholarships she gives a way. The tickets are $5, if you can please support her!!!

Stay tuned for more details.
Posted by TeamHyperNet1 at 3:32 PM No comments: 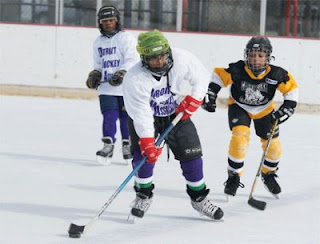 March 4, 2012 - The Michigan Citizen: Hockey in the Hood attracts suburban teams to the city - by: Harry M. Anderson, Jr.

A Google search of hockey news "hockey in the hood" 2012 yielded the results listed above.  This search also uncovered the following article about HITH VI in 2009 from "America's Sports Radio Network" - SCORES.FM -  Hockey in the Hood: Its Game On for All.

Hockey in the Hood 8 was also listed as an 'upcoming event' in Michigan's Official Travel and Tourism Site PURE MICHIGAN
Posted by TeamHyperNet1 at 12:29 AM No comments:

Congratulations to the Detroit Dragons Peewee B team for making it to the LCAHL Championship game after a two game win today at the semi finals and the finals, 1st game win 7-4 and the 2nd game win 5-4, and after a double over time game in which the Dragons clench their VICTORY win, Great job Boy's and Girl. Way to go!!!! Special shout out to a great coaching staff Coach Al, Coach Drake and Manager Cynthia and a supportive group of parents. See you ALL next week in Melvindale.
Posted by Stay@homemom at 10:00 PM No comments: