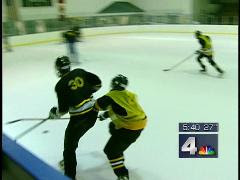 This piece is a bit longer than the WXYZ coverage of HITH 3.

WASHINGTON -- You typically wouldn't look in southeast Washington for young hockey stars, but because of the dedication of one man, the Fort Dupont hockey team is about to head to Detroit for a major national tournament.

Video: Watch The Report
Posted by Roy Bruinsma at 11:11 PM