Greatings from Columbus & Fantastic Finish to Hockey in the Hood

WOW!!!!! What a wonderful weekend.

The Columbus Ice Hockey Club would like to thank everyone from the Detroit Hockey Association for all their hard work and dedication to this splendid event. It was by our estimation the best HITH tournament ever!!! I'm only sorry that most of the Diversity Clubs were unable to see the two championship games. 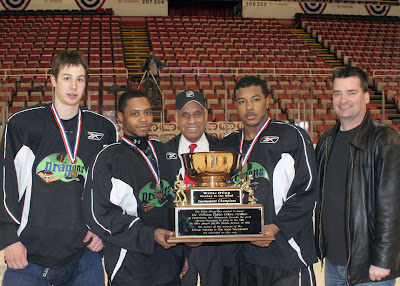 Alaska gave Detroit a wonderful game that went to overtime and then shootout! I didn't think it could get any better, but the midget game was one of the best hockey games I've ever seen PERIOD. Speed, teamwork, emotion, effort, sportsmanship, it had everything we as program directors are trying to accomplish with our programs! I'd like to thank all who participated for a truly wonderful weekend and let you all know we in Columbus already miss you all.

Thanks again, and see you next year in Detroit.

Note: The bantam final between the Wasilla Wild and Detroit Dragons finished regulation play tied 2-2 and Detroit won the shoot out. In the midget finals, Columbus vs. Detroit, the Dragons won 4-3. Both games were played at Joe Louis Arena and will be memorialized on the Willie O'Cup
Posted by Roy Bruinsma at 7:02 PM