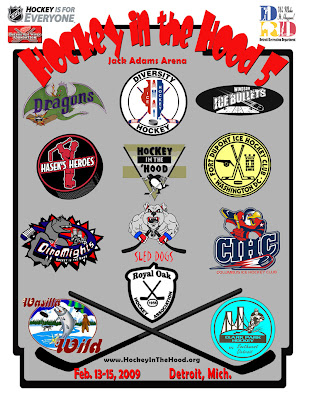 DETROIT-- (February 10) — The Detroit Hockey Association will be hosting "Hockey in the Hood 5", an annual youth hockey tournament designed to break down stereotypes and provide a high level of competition for inner-city hockey teams. This year’s tournament will be hosted at the Jack Adams Memorial Arena from February 13-15, 2009.

"The 2009 Hockey in the Hood tournament is our most diverse tournament to date," said Will McCants, Detroit Hockey Association president. "We have teams from Chicago, IL; Columbus, Ohio; Detroit; Minneapolis, MN; Washington, DC; Buffalo, NY; Pittsburgh, PA; Royal Oak, MI; and Wasilla, AK, battling for the Willie O’Ree Championship Trophy. And Mr. O’Ree, the man who broke the color barrier in the National Hockey League - back in 1958 - will be traveling from his home in San Diego to be a part of the festivities."

This year’s program also includes a matchup between the Michigan Sled Dogs and Windsor Ice Bullets, which are coed teams comprised of athletes with a variety disabilities. Sled(ge) Hockey is for people with special needs. The same rules are followed as in ice hockey, with six players on the ice, including a goalie. Players sit on a sled(ge), which is a narrow platform with skate blades attached to the bottom, and propel themselves using two specially constructed hockey sticks that have picks on the end. Players wear full hockey gear and are strapped onto the sledges. The sledges can be specially adapted to meet the needs of each player. The Sled Dogs and Ice Bullets face off at 12:30 p.m. on Saturday, February 14.

Also on Saturday, February 14, the Stanley Cup and Jack Adams trophy will be on display from 11:00 a.m. to 7:00 p.m. at Jack Adams Arena. The National Hockey League and Detroit Red Wings have teamed up to bring the Stanley Cup, the greatest trophy in sports, and the Jack Adams trophy, awarded annually by the National Hockey League Broadcasters' Association to the coach judged to have had the most influence in his team's success.

The games will be played at Jack Adams Memorial Arena, 10500 Lyndon, located north of I-96 between Wyoming and Schaefer, and City Sports Center, 3401 E. Lafayette, just West of Mt. Elliott. Admission is free, and games begin on Friday, February 13 at 9:00 a.m.