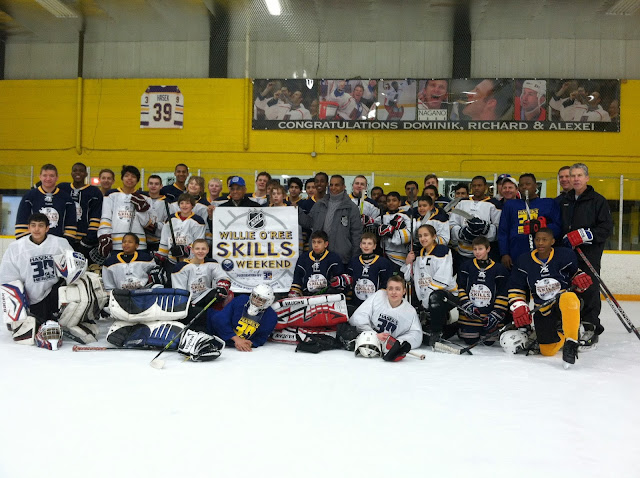 Two Detroit Area hockey players affiliated with Clark Park participated in the 2014 Willie O'Ree Skills Weekend competition for players aged 12 to 16 in Buffalo New York.  This event was hosted by Hasek's Heroes supported by the NHL's 'Hockey is for Everyone' program. Willie O'Ree - the NHL's Hockey is for Everyone Director and Lead Ambassador shared his wisdom with a new generation of Hockey Players.

Over 40 contestants traveled from all over the USA and Canada to participate. They competed in racing, shooting and passing categories.  These included several representatives from teams who participated in Detroit's former Hockey in the Hood tournaments.

These young hockey players and their chaperon's  witnessed former Buffalo Sabers Hall of Fame Goalie Dominik Hasek being inducted into the Sabers Hall of Fame. All the players got to meet Hasek when he visited them at the rink.  A great time was had by all!
Posted by TeamHyperNet1 at 11:20 PM