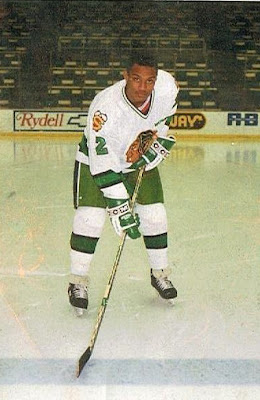 This season, the Detroit Hockey Association has been growing. We now have over forty children in the i-Program. Managing this growth, while still delivering individualized, skills based instruction requires more structure and focused coaching. Fortunately, the DHA has several volunteers who act as assistant coaches. The association is also fortunate to have Akil Adams as its lead instruction coach. Akil has been running clinics for all Dragons teams since early October. He has also taken over head coaching responsibilities for the i-Program. Following is a brief bio of Akil Adams.

Akil Adams began his hockey career at Jack Adams Arena at the age of 5. By the time he was 8, he was playing on a AA travel team called then The Detroit Rockies, who won the PAL National Championship in 1984.

Adams then went on to play AAA hockey in the Michigan National organization, where he was invited the USA Olympic Developement Team at age 16 and 17. At the age of 17, he was drafted in the 2nd round of the United States Hockey Leauge (Junior A) league to the Dubuque Fighting Saints.

Akil had a very successful year in the USHL where he was an All-Star, 2nd team all league and received a full scholarship to the University of North Dakota where he played two seasons before joining the Windsor Spitfires of the O.H.L. There he played with Ed Jovanowski of the Pheonix Coyotes before being traded to the Ottawa 67's.

Akil earned his BA in Communications from Wayne State University when he finished his career. Adams went on to be the 1st African American High School Hockey Coach in the State of Michigan at the prestigous University Liggett School in Grosse Pointe. He also ran the instructional program for the Grosse Pointe Hockey Association for three years.

Akil Adams headed up All Pro Hockey School for five years, before joining the Belle Tire AAA hockey organization as a coach, consultant and trainer. Yet, he finds greater satisfaction helping to grow the DHA. "My whole goal is to provide the kids from the inner-city with the training that I was not fortunate to have. I am passionate and dedicated to providing the infastructure essential to giving these kids the opportunity to go alot further than I ever did. Its good to be home."
Posted by Roy Bruinsma at 12:36 PM