We are the Champions Again!! Detroit Dragons Mite B Team Wins LCAHL Smythe Title at Joe Louis Arena 2nd Year in a Row! 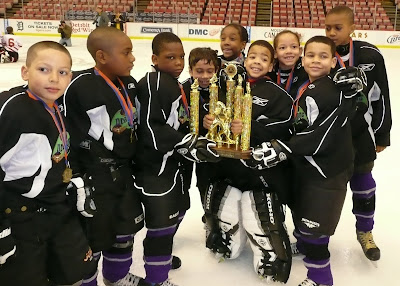 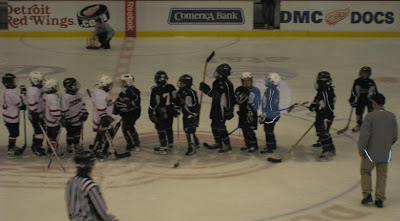 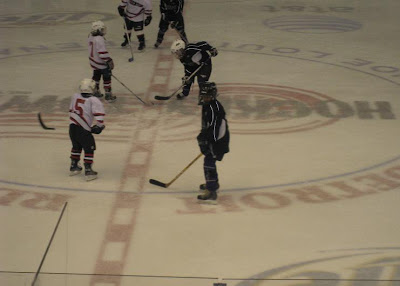 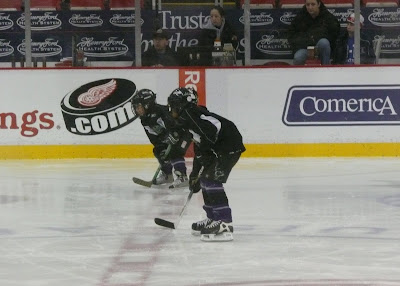 This past Sunday morning (3/15/09) the Detroit Dragons Mites defeated Trenton in a hard fought game by a 7-6 score at Joe Louis Arena. The Dragons overcame an early 2-0 deficit in this exciting game to take a 7-5 lead before allowing a sixth goal with approx. 30 seconds to play.

Overcoming adversity is nothing new for this tenacious team of nine players. Their regular season record was 1-15 and they began the playoffs losing to Canton 8-2 and this same Trenton team 7-2. Things did not look good in their third playoff game when they trailed the Wyandotte Warriors 2-0 with 6 1/2 minutes left to play. It was 'do or die' time for this young team. As it turns out, they had plenty of fight left. The Detroit Dragon Mites finally woke up and scored three unanswered goals to take a 3-2 victory.

They followed this third game victory with a 2-1 win that eliminated Belle Tire and moved them to a semi-finals showdown with the Canton Wings. The 2-1 victory over Canton was the most dominating display of defense the Dragons exhibited all season. They held this high-scoring team to less than ten shots on goal the entire game. This victory set the stage for the championship game.

Congratulations Dragon Mites! You never gave up.
Posted by Roy Bruinsma at 7:08 PM