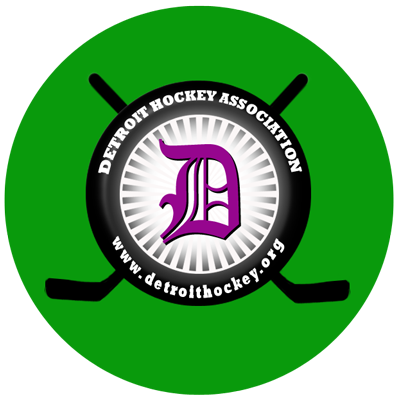 The Detroit Hockey Association received a new logo to consider on the same day the Detroit Red Wings eliminate the Anaheim Ducks 4-3 in game seven of the Western Conference semifinals. What a great day for Detroit Hockey!

This morning, a TeamHypernet graphics designer delivered this Detroit Hockey brand option for consideration of the Detroit Hockey Association board and membership. If approved, new logo merchandise should be available for purchase by the start of our next hockey season. Please note, this will not replace the Detroit Dragons team logos. It is intended as a logo for the association itself.

The proposed DHA logo is modeled after the big tire & its raised white letters just off I-94 east of Southfield in Allen Park. The unique olde English "D" in the center lets everyone know our home ice is in the city of Detroit, just like the Wings.