Hockey in the Hood VI featured in Hockey Weekly 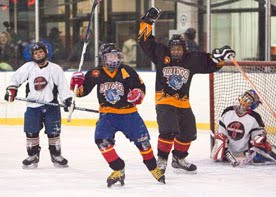 It’s clear Hockey In The Hood’s competition level is on the rise.

The sixth annual tournament, which has featured minority-based teams and organizations in its first five editions, included a new twist this year.

The tournament, which was held at northwest Detroit’s Jack Adams Arena and southwest Detroit’s Clark Park Feb. 12-14, also featured teams from suburban Detroit. The Squirt B Livonia Bruins, Pee Wee B Farmington Hills Bulldogs, the Pee Wee B Royal Oak IceDogs, Midget B Livonia Blackhawks and the Midget B Plymouth Sharks all participated in the tournament. They joined teams from the Detroit Hockey Association, Clark Park Coalition, Columbus Ice Hockey Club, Hasek’s Heroes (Buffalo) and the Wasilla Hockey Association (Alaska). Usual participant the Fort DuPont Hockey Club (Washington, D.C.) was scheduled to attend but couldn’t get out of Washington because of the excessive snow that has hit that area recently.

The Livonia Bruins won the Squirt championship with a 5-4 win over Columbus, thanks to Brendan Preiss’ shorthanded goal with 1:24 left that broke a 4-4 tie. The Bruins took another penalty with 1:02 left and fought off Columbus’ six-on-three attempt to tie the game with its goaltender pulled as time ran out.

The Farmington Hills Bulldogs and Hasek’s Heroes then upped the drama ante as Farmington Hills won 5-4 in overtime. Matthew Downey drove a one-time slap shot from the high slot past the goaltender (who wore No. 39, like the goalie who the organization was named after), with Kent Jackson doing his Tomas Holmstrom imitation by creating a screen in front of the net, 4:49 into the extra period to give the Bulldogs the win.

Hasek’s Heroes then got its revenge in the Bantam title game as it scored in the last two minutes for a 5-4 win over the Detroit Hockey Association’s Dragons.

The Plymouth Sharks then put an exclamation point on the thrilling afternoon of hockey by scoring with 49 seconds left in regulation for a 3-2 win over the Dragons.

"I think it was one of our most successful tournaments," tournament director and Detroit Hockey Association president Will McCants said, "because of the notoriety created by the suburban teams participating and those teams bringing up the skill level."

It was a positive experience for the suburban-Detroit teams.

"This was a great tournament. This is really nice," said Livonia Blackhawks’ coach Bill Sullivan, who coached in the Detroit Hockey Association for many years. "The kids got to experience a little diversity and they enjoyed it."

Preiss enjoyed the experience. "I learned about good sportsmanship and about other people," he said.

The tournament was also different for Detroit Hockey Association players.

"It (competition) is tougher," said DHA Midget player Kiernan Babcock. "Bringing in the local teams made it a little harder for us and because the other teams are getting better."

"It’s better for me, from the tournament point of view, to see other teams win it," he said. "That gives the tournament more notoriety and it makes us more determined." 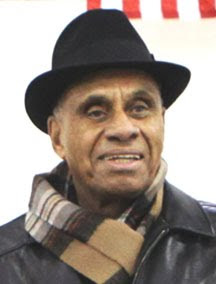 O’Ree, the NHL’s first black player, was on hand as usual. "This weekend has generated much more enthusiasm than past tournaments," he said. "Just an awareness of the kids of what’s going on."

Devon Fields, in particular, enjoyed the tournament. Now a coach with the Squirt AA Farmington Hills Fire, Fields grew up playing at Jack Adams Arena for Detroit Hockey Association Dragons’ teams. And this year’s tournament brought him back to the days when the DHA was thriving.

"This makes me think back to the times when every weekend was like this" – busy, with a lot of games going on, he said. "It’s a beautiful thing for Detroit to get a chance to experience it."

But there was one negative for McCants: The absence of the Fort DuPont Hockey Club and its president and founder, Neal Henderson, who co-founded Hockey In The Hood with McCants in 2005.

"I really feel bad. It’s a slight damper on the tournament," McCants said.

reprinted with permission and thanks to Hockey Weekly
Posted by Roy Bruinsma at 10:15 PM