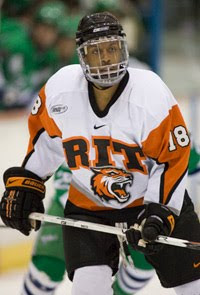 ROCHESTER, NY - Sophomore forward Cameron Burt (Detroit, MI) of the RIT men's hockey team was named the Atlantic Hockey Association Player of the Month of February on Tuesday. It is Burt's first monthly honor as a member of the Tigers. He was a two-time AHA Rookie of the Week last season.

How about RIP, for the remains from the carnage that has been created in the first two days of the 2010 NCAA hockey tournament?

Quick show of hands: Who had the Rochester Institute of Technology advancing to the Frozen Four? A better question might be how many of you knew RIT played Division I hockey?

But the prize of another weekend of hockey was exactly the reward on Saturday night as the No. 4 Tigers (No. 15 overall in a 16-team field) breezed by No. 3 New Hampshire 6-2 to win the East Regional in front of 3,737 at the Times Union Center. RIT became the first Atlantic Hockey Association team to advance to a Frozen Four. [more]
Posted by Roy Bruinsma at 9:24 PM