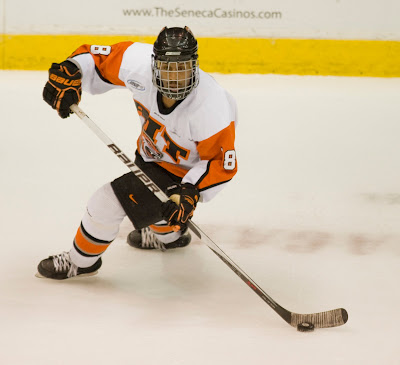 By Raymond Rolak
DETROIT -- It will be a homecoming for Rochester Institute of Technology sophomore, forward, Cameron Burt. The NCAA Men’s Frozen Four will be held at Ford Field and RIT will be making their first appearance in the championships against Wisconsin, on Thursday at 5:00 PM. The game will be broadcast on ESPN. Miami and Boston College will square off in the other semi-final at 8:30 PM.

This will be the sixth time Detroit has hosted the NCAA Men’s Ice Hockey Championships. But this will also be a first for Ford Field. These will be the first sanctioned hockey game ever to be played in the stadium.

Burt, RIT’s leading scorer (16-31-47), got his first taste of travel hockey at Jack Adams Arena, playing in the Detroit Hockey Association. The Detroit PSL (CMA) graduate went on to play for the Green Bay Gamblers in the USHL for his elite junior experience.

Burt’s success is a testimonial to the vision of the pioneers in Detroit hockey. The Detroit Recreation Department was always at the forefront. Hockey support from names like Ilitch, Adray and Karmanos helped. The Great Lakes Invitational Tournament at Christmas time is part of the historical fabric of college hockey. The late Don Canham was such a tremendous advocate for the college game.

From St. Clair Shores to Trenton and all around Metro Detroit, no one can argue….This is Hockeytown. There is even an adjacent Hockeytown Café and former University of Wisconsin star Chris Chelios has a tavern that is very short walk from Ford Field. Also, close to Ford Field is the very ethnic Greektown area.

The DHA has had a storied tradition of producing college players for well over 60 years.

The National Hockey League has recently put money and energy to promote diversity. It was 52 years ago that Willie O’Ree played for the Boston Bruins and became the first black man to make his mark in the NHL. O’Ree, now 74 heads up the NHL’s inner-city and ethnic neighborhood program to develop hockey interest in urban areas.

This is the 12th year for the NHL plan. O’Ree said, "These programs are working, we started in four cities and are now in 40 locations throughout the States and Canada." He added, "Every boy or girl has natural ability, they just need the opportunity. All groups just need to get exposed to hockey."

The NCAA has always had an ambassadorial approach in hockey. Successful effort is rewarded, regardless of background. The University of Michigan and Michigan State always embraced minorities. Former Michigan coach Al Renfrew said, "Just look to Mel Wakabayashi as an example." As he referred to his All-America center on his 1964NCAA Champion team.

The late "Godfather" of hockey in Minnesota, John Mariucci, echoed similar thoughts when he coached the Gophers. At any speaking engagement he would rally the hockey cause by saying, "Anyone can play hockey at an elite level if given the chance, and we just need 10,000 rinks." His belief and determination that everyone has a right to play hockey, including women, was reinforced by the recent Olympic medal success. Walter Bush encouraged diversity and USA Hockey carries that vision on an inter-national level today.

The City of Detroit has had a surge of new hockey interest. Besides the Detroit Jack Adams indoor rink, the Detroit Clark Park outdoor rink has benefitted from the NHL program. Each February, the DHA hosts a national invitational tournament as part of Hockey Day in Michigan titled "Hockey in the Hood".

On Friday, April 9, the area will be rocking as it is the home opener for the Detroit Tiger’s at adjacent Comerica Park. At 5:00 PM, there will be a NCAA player’s skill contest at Ford Field. Wayne State Warrior, Lindsey Park will participate. Then the Hobey Baker Award will be announced at Ford Field.

On April 10, as part of the Frozen Four, USA Hockey will be hosting a Level III Coaches Clinic at the Ren-Cen. Pre-Registration is required. Also, during the April 8-10, NCAA Finals, the CCHA is hosting a free Fan Fest at the GM Winter Garden, also in the Ren-Cen.

As a legacy project, the NCAA has instituted a book drive. Partnered with the Detroit Local Organizing Committee and the Detroit Public Schools Foundation, the Frozen Four will have deposit locations for new or gently used books at Ford Field -Gates A, B or G and the Marriott Renaissance Hotel lobby and GM Winter Garden.

The popular NCAA Yes-Clinic presented by the college coaches has been eliminated this year.

It is very appropriate that Burt will be center stage. He has earned his accolades. No player is as hot as Cameron Burt. He has 11 points in his last six games. He had the game winner in the 2-1, NCAA Regional victory over Denver. RIT coach Wayne Wilson brags about him saying, "He has great offensive instincts and is smart with the puck. Right now, he is our go-to guy."

Wisconsin has the history, winning two NCAA titles in Detroit previously. RIT is the hot team, winning their last 12 games. Wisconsin will probably have the most support in the stadium. Cameron Burt will get the most enthusiastic reaction. Home grown !!!!!!!

The CCHA and the Detroit Sports Organization get applause for their efforts. Most important, a great big Thank You is in order to all the Hockey Dad’s and Hockey Mom’s, of Metro Detroit. PAST and PRESENT!!!! All in all, HOCKEY gets the victory.

(This article courtesy of "THE POLISH NEWS", Raymond Rolak is a Michigan based Sports Broadcaster)
Posted by Roy Bruinsma at 11:16 PM